The rain couldn’t dampen either the beautiful peacock costumes or the spirits of Wayne Flanagan and Claire Nash as they ran the Virgin Money London Marathon on Sunday.

Wayne and Claire ran in memory of their daughter, Jade Peacock, who was given the middle name by her brother, Elijah. Jade died in January this year and the family have been raising money for the Evelina London, Lewisham Hospital and Demelza Hospice – all of whom cared for Jade and the family at one of the most difficult times imaginable. 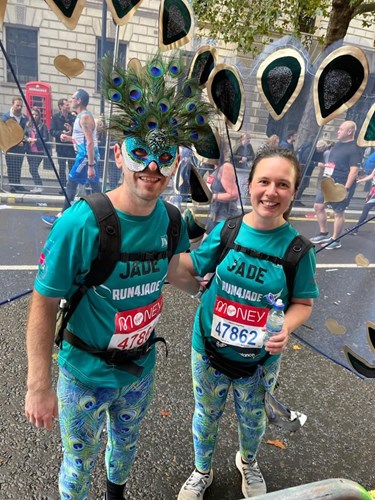 For Wayne, this was his fourth marathon in 21 days, and this time he was joined by Claire, both dressed as flamboyant peacocks with Jade’s name emblazoned on their running shirts. The streets of London rang with Jade’s name as the couple were encouraged by thousands of people cheering them on. Raising a further £6,000 to add to their running total, the couple were overwhelmed by the support they received and have now raised over £40,000.

The marathon is not for the faint-hearted and kudos to all of the 39 Demelza runners who completed the course – thank you, you are all incredible! And spare a thought for Anna Jane Casey, West End star, who ran for us this year and first thing Monday morning was back in rehearsals for the show Cabaret, high kicking her way through complicated dance routines alongside Oscar winner Eddie Redmayne! 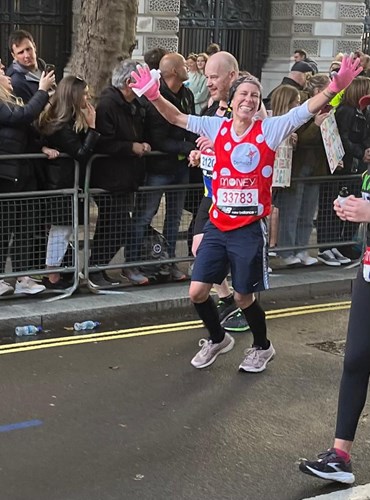 This year saw a fantastic sum raised by #TeamDemelza, although the final figure is not in yet, we’re looking at over £100,000!

If you want support Demelza by running next year’s TCS London Marathon, we’d love to hear from you.

Apply to run the London Marathon 2022