Tim talks about his experience of climbing Mount Snowdon

Tim talks about his experience of climbing Mount Snowdon

The sky was already dark and the rain gently falling as we stepped out of the youth hostel and looked towards the track that would lead us up the 3560 feet to the top of Snowdon - the UK's second highest mountain after Ben Nevis.

The night trek to the summit would take us just over four hours and whilst it was definitely dark and damp - spirits amongst our 12 climbers and the support team were high.

It is fair to say that this was not "my first rodeo"; I have been fortunate enough to have taken part in several of Demelza's challenges. Whilst they are definitely big challenges which have included several bike rides, a triathlon and of course climbing the UK's highest mountain back in 2015, they have all been completed alongside fellow staff, volunteers and Demelza supporters.

When I joined Demelza back in 2009 I would never have imagined that I would be capable of cycling all the way from the hospice in Sittingbourne to the Eiffel Tower in Paris, or any of the other challenges I have been lucky enough to have taken part in.

So - why have I done it? Firstly I enjoy the challenge, but more than that it is a chance for me to do something that will help raise funds for the children and families that we are here to support. I've worked in the hospice and met with children and families whose whole lives have been turned upside down through no fault of their own. It is hard to imagine how I, or my family, would feel in their shoes and if I can help in a small way (whilst also doing some amazing things with a bunch of like minded supporters) then I am a very lucky man. 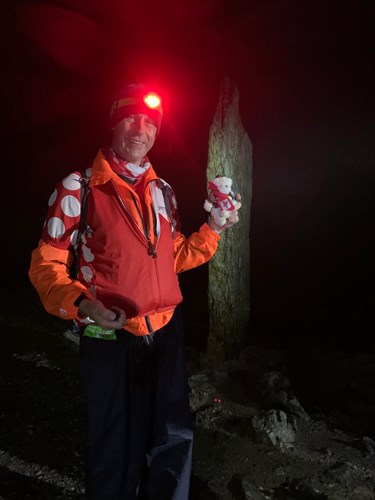 The Snowdon challenge was originally (for me) to help train for my biggest challenge of all - the Kilimanjaro climb - now scheduled for October 2022.

Fundraising in these last 18 months as been difficult. My previous fundraising has all been done in supermarkets so I need to do something new in the next 12 months to raise the vital funds - which will give me the adventure of a lifetime and hopefully raise both money and awareness for Demelza and the children and families we support.

Will I be able to climb Kilamanjaro? I honestly don't know. I will be at least two years older than when I originally said I'd do it, and have a pair of very dodgy knees. But I won't know unless I give it a try - which is what I fully intend to do.