Demelza supporter nominated for ITV award after raising over £130,000

Demelza supporter nominated for ITV award after raising over £130,000

Cessy Crascall from Dover has been hailed as a 'local hero' and 'unstoppable fundraising force' by ITV Meridian after her nomination for their Fundraiser of the Year Award was announced on their evening news at the end of last month.

Cessy first began raising funds for Demelza more than twenty years ago, with a skittles match, and has continued to do so ever since with countless events at her local pub, charity raffles and even a skydive! To date, Cessy, who leads a group called the Sunshine Girls, has raised a phenomenal £134,000 for Demelza, most recently delivering their annual cheque just before the UK went into lock-down in March, with their largest sum to date of £13,000. This well-deserved recognition as a shortlisted nominee for Fundraiser of the Year is part of the wider Daily Mirror Pride of Britain Awards.

For Cessy, helping families make the most of the time they have together is a passion. Speaking to ITV Meridian's Sarah Saunders, Cessy said: "One of the loveliest things I think, is when something does happen and the child passes, they've got facilities at Demelza where the families can stay, and the mum and dad can be with the child."

Demelza's previous Chief Executive Ryan Campbell CBE spoke with pride and respect for Cessy on behalf of the whole organisation. "We want to say thank you. When somebody goes above and beyond with that level of contribution, it's not just a contribution to our children's hospice as important as that is, it's a contribution to Kent, to society. It is people like Cess who keep community together."

The fundraising efforts of Cessy and her Sunshine Girls helps Demelza to offer support to young people like Elke and her mum, Glynnis, who added: "There's very few people who actually raise money every single year without fail. Coming up with different ideas of things to do must be such a difficult task so it's phenomenal that Cessy has managed to sustain fundraising over so many years."

"Demelza is a special place," Cessy concludes. "I'd always do anything for it."

The staff, volunteers and families at Demelza are all backing Cessy and the Sunshine Girls for their unfaltering dedication and support. No matter what, you're our winner!

To watch the full ITV Meridian report on Cessy, you can see it online here.

Huge congratulations to Cessy on being crowned ITV Meridian Fundraiser of the Year on Friday last week!  We couldn’t be happier and will be cheering her on for the final of the Daily Mirror Pride of Britain awards later in the month. 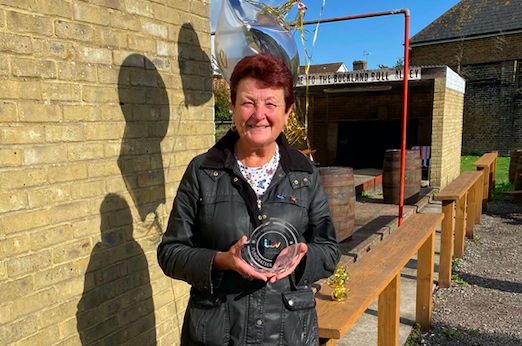